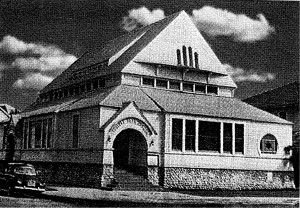 As Temple Beth Sholom approaches its 80th anniversary in 2023, we become nostalgic about our beginning and our history.

In 1943, during World War II, the families of 25 Jewish merchants in downtown Santa Ana met on Friday evenings, in a  home, to hold Shabbat services.  They became the first Jewish congregation in Orange County and, in 1945, occupied their first Temple building at the corner of Eighth and Bush Streets in Santa Ana.

That was our home until 1962.  The congregation had grown to 262 families when they walked from that first building to our present location, carrying our Torahs with them.  The building was new, but our dedication to making our congregation the focal point of Jewish life remained the same.  We celebrate our third and fourth generation families, as well as welcoming our newcomers.

Because our membership continued to increase, we found it necessary to upgrade the facility with “Project Pride” in the 1990’s. Then came the Living Legacy Campaign in 2012 to redesign and modernize the facility and create an integrated campus to better serve our congregation well into the 21st century. A kitchen fire in 2014 kicked this project into high gear leading to the rededication of our beloved sanctuary in August 2015 and the completion of the overall project in 2016.

The building is WHERE the congregation is, not WHAT the congregation is! Our mission continues to offer people of all ages, who have a desire to participate in Jewish life, a warm, caring and uplifting environment. Our clergy, educators and dedicated lay leaders give us spiritual inspiration, innovative programming and motivation to keep Judaism an important part of our lives today.  May it continue to serve the generations of tomorrow.

Temple Beth Sholom as it is today