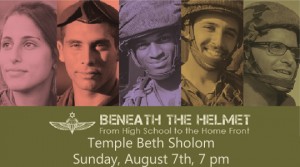 Join TBS friends for a screening of
“Beneath the Helmet: From High School to the Home Front”
followed by a discussion with
Major Jordan Herzberg from the IDF.

“Beneath the Helmet: From High School to the Home Front” is a coming-of-age story which follows the journey of five Israeli high school graduates who are drafted into the army to defend their country. At the age of 18, away from their homes, families and friends these young individuals undergo a demanding, inspiring journey, revealing the core of who they are, who they want to be.    Website: http://www.beneathhelmet.com/ 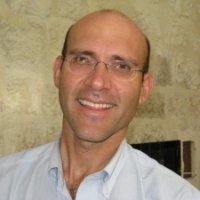 Jordan Herzberg has been active in diplomacy, political and security affairs in Israel
for over 20 years. Serving as a track two diplomat for several Israeli Prime Ministers,
Jordan participated in hundreds of hours of back channel negotiations with
neighboring Arab heads of state, and has advised several Israeli government
ministers.
Volunteering as a lone soldier in the elite Paratrooper Brigade, Jordan served in
several different combat theatres, including extensive military service in Lebanon and
Judea/Samaria. Jordan currently serves as a commander in a combined
paratroop/infantry/armored division, with the rank of Major (Reserves).

Jordan has a BA with Honors in Political Science and Judaic Studies from the University of Michigan, and a Master of Arts in Law and Diplomacy from the Fletcher School at Tufts University, including studies at the John F. Kennedy School of Government at Harvard University and Harvard Business School. Jordan is a graduate of the Yad Ben Zvi Institute in Jerusalem and a Ministry of Tourism licensed tour guide. Jordan grew up in Florida. He made Aliyah in 1993, and lives with his family in Jerusalem.
He served as Chairman of Mechinat Lachish Meitarim, one of Israel’s largest pluralistic gap year programs for young men and women, secular and observant. He is on the board of the Pardes Institute of Jewish Studies.
Jordan’s real passion is showing off the Land of Israel. Whether you are a novice to Israel or a frequent traveler, Jordan promises that your time in Israel will be a Chavaya, a unique life changing experience.

$10 suggested donation includes popcorn & a drink.
Those 19 and under are free.

2 Responses to Beneath the Helmet