By Temple Beth Sholom on September 28, 2016 in Echoes of Elul

As I prepare for the New Year, I continue to think about the people in my life who have made it possible for me to enjoy and appreciate freedom. I chose to remember and honor people from the past in order to inspire me and others to live life more fully in what may seem to be an unusual location, my McDonald’s lobby. 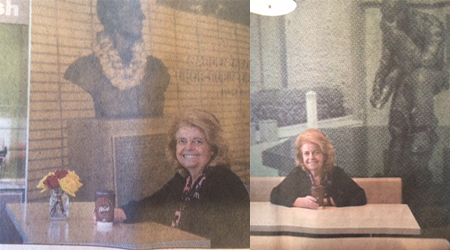 McDonald’s is a part of the fabric of America. Every community has a local McDonald’s where senior citizens gather in the morning to discuss politics, teenagers hang out after school and children meet to celebrate their soccer team victories. What better place to remember and pay homage to local home town heroes. On the walls of my new lobby are two over sized murals.  One is a tribute to Tibor Rubin and the other a tribute to the Garden Grove Police Department. Tibor Rubin, medal of honor recipient, Holocaust survivor and Korean War veteran was credited with saving more than 40 American prisoners of war. His entire family perished in the Holocaust and many of the survival skills he learned at Mauthausen concentration camp in Austria were used to save his fellow prisoners of war in North Korea.  In 2005, President George Bush presented the Metal of Honor to Rubin. Rubin was a local hero who lived in Garden Grove until he died December 5, 2015 at the age of 86.  The second mural memorializes five Garden Grove police officers killed while on duty. Five officers – more than any other city in Orange County. Sgt. Myron Trapp, Reserve Officer Andy Reese, Officer Donald Reed, Officer Michael Rainford and Master Officer Howard Dallies Jr. These five home town heroes gave the ultimate sacrifice so that we can enjoy freedom and safety in our community.

I wanted to pay tribute to local home town heroes, not the “heroes” that play sports, or become famous as big name entertainers but the real heroes. These heroes from my small town of Garden Grove were willing to make the ultimate sacrifice. It is the sacrifice that allows us to be safe in our homes, to be able to enjoy the privileges of the Constitution and of course to be a Jew. Is McDonald’s an odd place to pay tribute? I don’t think so. It is a place where families gather together to enjoy being families in America. It is a place to enjoy a quick meal and yet maybe an opportunity to take a moment for introspection to thank those who have gone before us.

One Response to Day 25 – Heroes and Murals