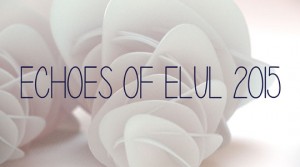 When I was a little girl I loved to spend time with my Gramma Fanny.  I remember a time when I was four years old and was in Gramma’s kitchen on a Friday morning.

Gramma Fanny was busy at work cooking and cleaning for Shabbat.  There was newspaper on the floor and good smells coming from the oven.  Looking around the kitchen I noticed a row of jars and a blue and white box sitting on the window sill above the kitchen sink.

“Gramma, what are all those jars for?” I asked.  “Why to make the world a better place,” she said.  Before I could ask any other questions there was a knock on the kitchen door.  When Gramma answered the door I saw a man with a long black beard, a long coat and a black hat.  Gramma must have known who he was because she said “Just a minute,” and went to the window sill and got the blue and white box, and gave it to the man.  He gave her another blue and white box in return.  “Gut Shabbis,” he said, and walked away.

“Gramma, what just happened?” I exclaimed.  “What was in the box?  Who was the man?”  Gramma said, “Such a little girl, so many questions.”

“Remember I told you that the box and jars were to help make the world a better place?  They are filled with money:  pennies, nickels, dimes, quarters and a few silver dollars.  Almost all the jars and the box on my window sill are ‘Pushke’s.  Grandpa and I put money in them to give to people who are helping to repair the world, just like the man who came to the door a few minutes ago.  A pushke is a little like a small bank that people put money in to give away for Tzedakah.  For us Jews, Tzedakah is a duty.  Your friends might call it charity, but that’s not all.  Tzedakah is doing what is right and an act of justice.”

She turned back to the window sill and said, “This jar is for you.”  I was so excited!  I opened the jar and it was filled with money.  There must have been two or three dollars in the jar, more money than I ever had before.  “For me” I asked excitedly.  “Yes my shanah madelah, for you,” she said.

“Wow, what can I buy, when can we go shopping?”  “Whoa, slow down,” she said.  “There is a catch.  You must give some of the money away so that you too will help repair the world.”

“That’s the whole point,” she said.  You are growing up and some day it will be your turn to ensure that the work to repair the world will go on.  So now you learn how to live a just life and some day you will share what you know with your own children.”

What a wise woman my gramma Fanny was.  She knew that kids are engaged in a daily struggle with justice and behavior and that childhood is the ideal time to teach about justice from the Jewish perspective: tzedakah.

It seems that the early childhood lesson of generosity taught to me by Gramma Fanny played a major role in developing the charitable personality that I now possess.

Gatherer of sparks:  some of our ancient rabbis believed that when God was creating the universe, the Eternal placed a divine light into special celestial containers.  But it turns out that Creation did not go quite as planned, and an accident occurred.  The vessels were broken and the universe became filled with sparks of divine light and shards of broken vessels.  The rabbi’s believed that the task of Creation would not be complete until those sparks were gathered together.  We call this task Tikkun Olam, or repair of the world.

(adapted from “Portrait of a Spy” by Daniel Silva)