By Temple Beth Sholom on September 7, 2020 in Blog, Echoes of Elul

Years ago, I became aware of Ken Nwadike Jr. and his Free Hugs Project. I saw videos of him wearing a tee-shirt which read FREE HUGS. He was walking through protests, some of which were very heated, offering hugs to anyone who’d like one, protesters and police alike. I saw this activist brokering a more peaceful attitude with both sides, and I felt hugely inspired by him. The fact that I lived far away and was nowhere near brave enough to stroll through an intense crowd of angry protesters kept me admiring from afar.

Then I learned about a woman named Sara Cunningham. She’s a Christian whose son is gay. She spoke eloquently of her initial struggles to reconcile her religious beliefs with her unquestionable love for her son. Her beautiful reconciliation became “Free Mom Hugs,” a group of affirming parents and allies who love the LGBTQ+ community unconditionally. They are dedicated to educating families, houses of worship and civic leaders, encouraging them to not only affirm the LGBTQ+ community but to celebrate them! I have a lot of people in my life who are LGBTQ+ and I wanted to be part of this. I joined freemomhugs.org.

Last winter, a transgender couple were asking for Moms to be stand-in moms at their local wedding and for some help with the reception space. So many Moms volunteered that the wedding was immediately covered, so I signed up for reception duty. I met Greg and Colleen Dunbar, the leaders of the local chapter, and I was so thankful to have a few hours to work with them and get to know them. The kindness comes off them in radiant waves, and their energy was, dare I say, “sparkling.” They are LOVELY people, and it was a great first experience!

Then the pandemic happened with its lockdown and quarantine. Pride Parades were cancelled. I was so disappointed! But not for long…Colleen sent out messages that just because we weren’t allowed to hug, didn’t mean we couldn’t show our love and support. She and Greg created “Care-A-Vans,” where volunteers met, decorated their cars with beautiful signs that Colleen made and then drove through communities which had been scheduled for Pride events. The caravan I participated in drove through the Orange Circle and neighboring communities, honking and waving to the cheers of onlookers. It was an AMAZING day! We ended up together where we un-decorated our cars and visited for a while. I drove home that day feeling SO HAPPY and so thankful to have this warm and loving group that I could be a part of to spread the messages of love and acceptance.

There’s an upcoming Care-A-Van in Whittier on Saturday, September 26th. If you’d be interested in joining in the celebration of our LGBTQ+ community, join freemomhugs.org and drive alongside me in the parade. Or if you want to ride with me, I drive that big ol’ Town & Country…I’ve got room! 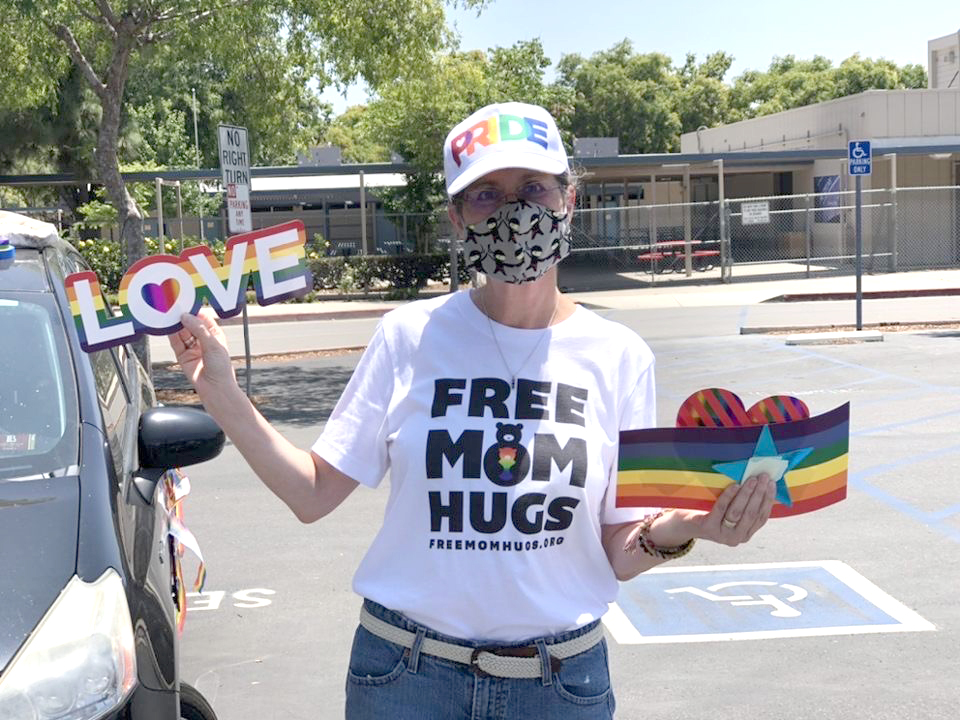