By Temple Beth Sholom on September 21, 2019 in Blog, Echoes of Elul

At the beginning of the last century, my grandmother, Yetta Post, left her parents and sister in the village of Suvalk Gubernia, Poland (which was then part of Russia) with her young husband, Sam, and baby son, my uncle Harry. Yetta and Sam had married when they were both sixteen as their families wished them to emigrate to the United States. Sam was eligible for the Russian draft and according to family legend, they escaped from Poland with the help of a farmer with a cart who hid Sam in the hay. Nevertheless, Yetta managed to bring some family silver candlesticks, several copper cooking pots, and a feather bed in a steamer trunk. They embarked on a steamship and arrived in New York in 1903.

They settled in Erie, Pennsylvania where Yetta had several brothers already established in business. Sam was a tailor and immediately set up shop in a small store, and Yetta started on what was to a large family, three boys and four girls.

Yetta was an extremely religious woman. It was not easy to be observant in the small town of Erie. Prayers three times a day were required and with a growing family and lots of household chores it took perseverance to fulfill her religious obligations. There were few other Jewish families although a slow stream did eventually arrive. There was no synagogue for worship and not even a kosher butcher. The family existed on fish, dairy products, fruits and vegetables until a kosher slaughterer arrived sometime around the first World War. 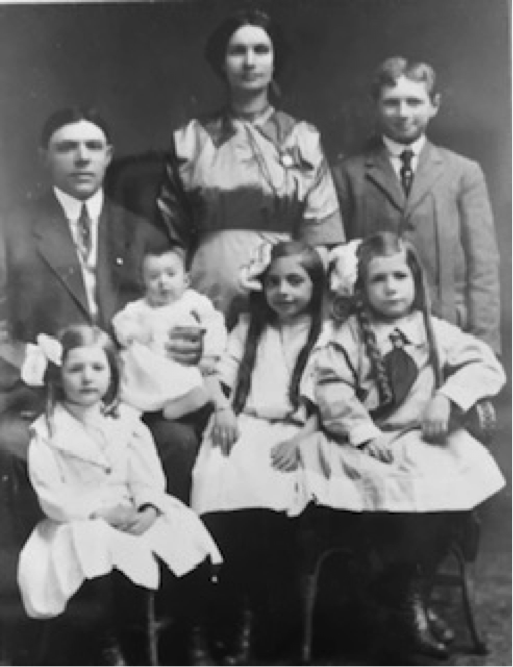 Meanwhile Yetta and Sam were instrumental in forming a committee to found a synagogue where the small but growing Jewish community could worship. This became a reality in the early twenties and was called the Seventeenth Street Synagogue. My grandmother was a regular congregant there until old age forced her to live in the Browns Hill Home for the Aged in Pittsburgh.

My mother told stories of traveling scholars who came to my grandmother’s door to ask for funds for orphanages and old folks homes and to have a good kosher meal. She never turned anyone away. My mother and her sisters often slept on the kitchen floor so that the itinerants could sleep in their beds. My brother recently wrote an essay about Bubbe and the beggars. He said that when he was about twelve he told her that maybe these men weren’t all they claimed to be and that they were taking advantage of her. She replied that she was aware that some of them might be phony, but even if only one of them was honest it was her duty, her mitzvah and commandment, to give them small sums of money, a good hot kosher meal, and a bed for the night.

Yetta was a model homemaker. Her daughters learned all the housewifely arts and we granddaughters were put to work dusting and polishing whenever we visited. Today, the

smell of beeswax polish immediately transports me back to Bubbe’s front parlor. She raised her seven children, enjoyed her thirteen grandchildren and lived to the age of seventy-nine, outliving her husband by twenty years.

As I grew to adulthood, I realized the courage it took for a teenaged bride and groom with a baby to pick themselves up, leave their home, and head for a place that might have been hostile, where they didn’t know the language, and hardly knew a soul.

Bubbe was the strong partner in her marriage. My grandfather was a sweet, gentle man who was not as religious at his wife or as purposeful, so I am certain that it was she who had the pioneer spirit and the drive to take them to this new land and to thrive.

Shabbat Shalom
Looking into the Face of a Newborn