By Temple Beth Sholom on April 12, 2019 in Blog, Brotherhood 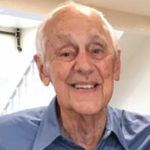 Sadly, Bernie Horwitz passed away before he could formally accept his award at the TBS Brotherhood Shabbat program on April 12th.

Every synagogue has at least one man who has given his time, leadership, wisdom, and financial resources over many years to advance the life of the Temple. Bernie Horwitz, was that man at Temple Beth Sholom, and it is for that reason, we named Bernie the 2019 Temple Beth Sholom Brotherhood Man of the Year. Bernie was recuperating from a fall when we announced his award at the Men of Reform Judaism West, Annual Man of the Year Dinner in March.

Bernie’s vision brought the UAHC (now URJ)Biennial to Orange County for the very first time and he served on the Union Board for 12 years. He established the Maxine Horwitz Cultural event in honor of his dear wife, Maxine, after she passed away. His endowment has brought musical and cultural events to Temple Beth Sholom and the Jewish community annually for the past 10 years and will continue to fund the program far into the future.

Bernie was passionate about projects to bring the Temple Beth Sholom religious space and physical plant into the 21st century. The Master Plan that was developed and implemented into a renovation of the main building and campus is a testament to his ideas and vision. Whether it is temple leadership or Brotherhood Poker Night, his philanthropy or weekly Torah Study, Bernie Horwitz’s life was bound up in Temple Beth Sholom, and we are proud to name him the Temple Beth Sholom Brotherhood 2019 Man of the Year.