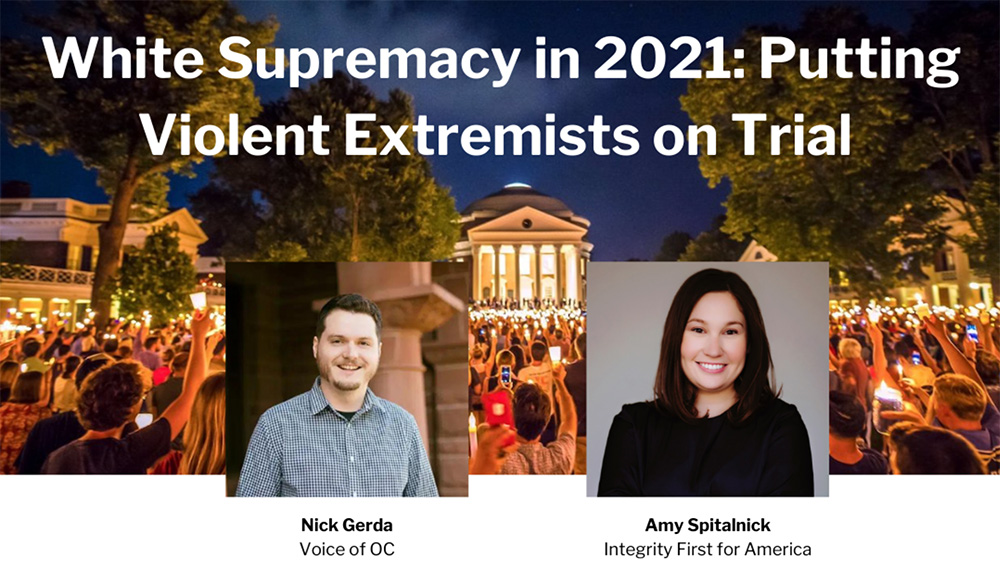 Tuesday, June 15, 2021
For those who were unable to attend the TBS Brotherhood speaker series event on White Supremacy in America 2021: Putting Violent Extremists on Trail, here is a link to a recording of this important discussion, with Integrity First for America

In 2017, white supremacists meticulously planned and carried out a violent attack on Charlottesville that resulted in dozens of injuries and the death of Heather Heyer.

Nearly four years later, far-right extremists are even more emboldened by years of disinformation, conspiracies, and hate–made clear by the insurrection at the U.S. Capitol, the shootings targeting the Asian American community in Georgia, and record level hate crimes and domestic terror. Integrity First for America is fighting back with its landmark Charlottesville lawsuit.

Join Integrity First for America Executive Director Amy Spitalnick and Voice of OC Columnist Nick Gerda for a critical conversation hosted by Temple Beth Sholom of Orange County. Together, they will explore the path from Charlottesville to the Capitol and beyond, and how we hold these violent extremists accountable — starting with IFA’s Charlottesville lawsuit, Sines v. Kessler, which takes on the leaders of this violent movement and heads to trial this fall.