The World Zionist Congress (WZC) is a representative body of the world’s Jewish people.

Established by Theodor Herzl in 1897, the Zionist Congress (as it was originally known) was the legislative body of the World Zionist Organization (WZO), a non-governmental entity that promotes Zionism. Today, the two bodies are known respectively as the World Zionist Congress (WZC) and the World Zionist Organization (WZO).
The WZC, also known as the Parliament of the Jewish People, comprises 500 delegates and meets in Jerusalem every five years. It enables delegates to exert ideological influence on both Israeli society and the global Jewish agenda, as well as allocate financial and other resources to various organizations – including the Reform Movement – in Israel.
The 38th World Zionist Congress is scheduled to meet in Jerusalem from October 20-23, 2020; the elections will determine the size of the various delegations to the Congress and are scheduled to be held from January 21 to March 11, 2020 (MLK Day to Purim).

Participating in the WZC Elections is the only way North American Jews can weigh in democratically about issues in Israel.

Currently, the United States has 145 delegates in the WZC, the largest single delegation outside Israel. Thanks to a robust turnout in the 2015 elections, 56 of the 145 delegates (39 percent) represent the Reform Movement and, as a result, have been able to ensure that more than $4 million a year ($20 million over five years) is being directed to the Israeli Reform Movement. By comparison, the Israeli government annually provides nearly 4 billion NIS ($1.1 billion) to Orthodox and Haredi institutions in Israel.
A strong election turnout among North America’s Reform Jews and our supporters and allies will ensure that financial resources will continue to flow to our Israeli movement – including Reform congregations and institutions. It also will allow us to fill leadership positions in some of Israel’s national institutions, including the World Zionist Organization (WZO), the Jewish Agency for Israel, and Keren Kayemeth LeIsrael – Jewish National Fund (KKL-JNF).
A leadership role in KKL-JNF will enable us to ensure that decisions about government and public spending over the Green Line, including land purchases, reflect the Reform Movement’s values and positions. Only in this way can we continue to build a democratic society in Israel that truly reflects the Jewish values we hold dear: pluralism, equality, economic justice, and peace.
What’s more, because JAFI and the WZO support programs of the World Union for Progressive Judaism (WUPJ), high voter turnout will provide support for WUPJ congregations and for Netzer Olami and Tamar, which offer programming for Progressive Jewish youth and young adults in communities around the world.

Who is Eligible to vote?

Voters in the WZC Elections must: 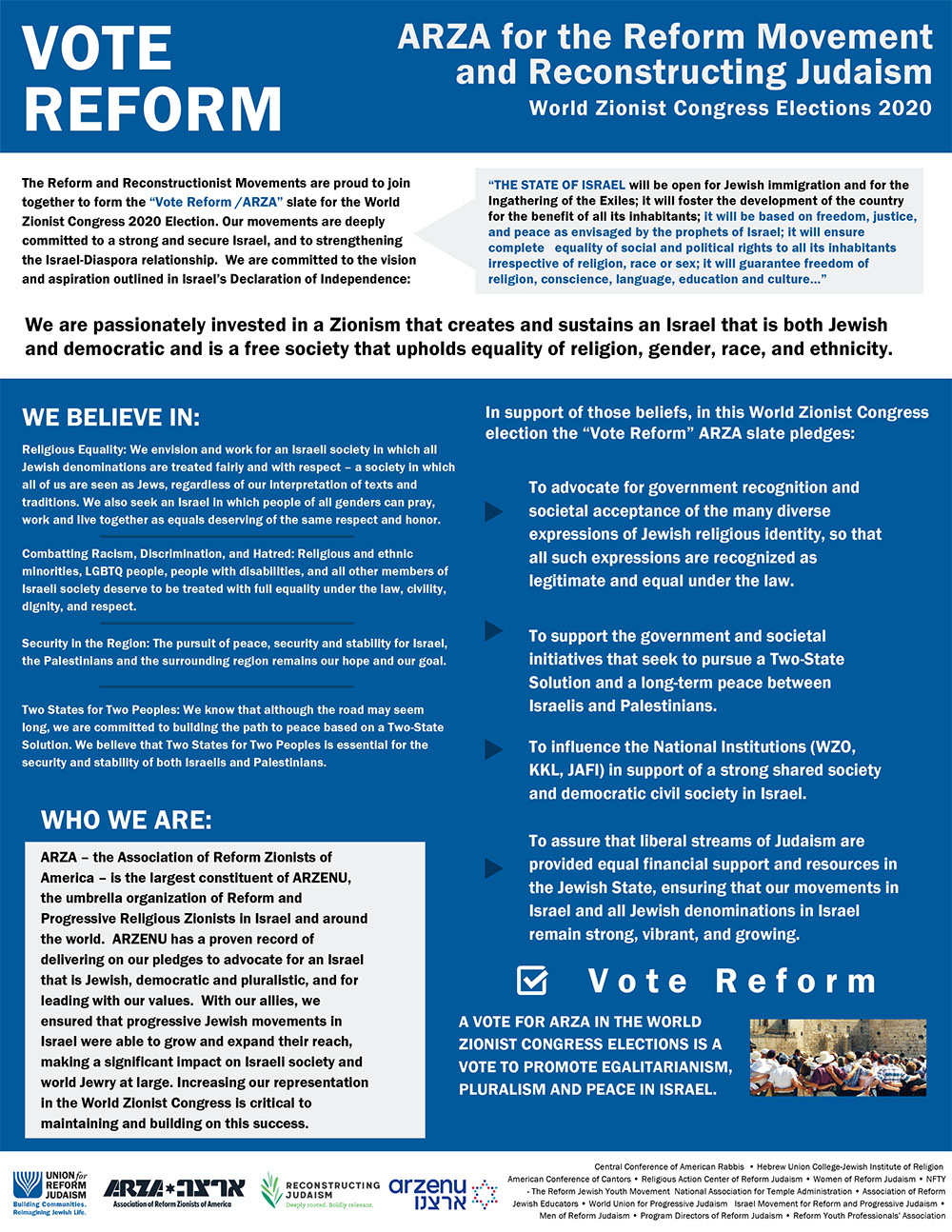